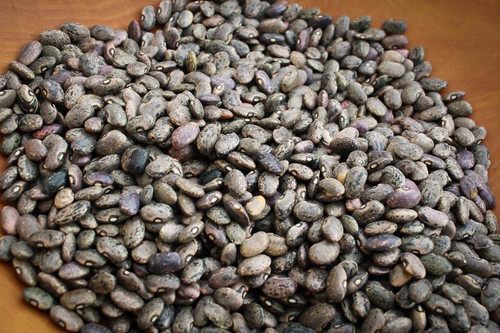 Beautiful markings and a dense, rich flavor make this super rare bean a favorite. Almost a marriage between a black bean and a pinto but unique in its own right.

Raw, the markings have to be among the prettiest of all our heirloom beans, but it's when they've been cooked that you'll be especially happy with them. Moro beans seem to be a cross between a pinto and a black bean, with a rich, dense texture and a bean broth that you could eat alone as a soup, without the beans! The beans are velvety yet solid. We think they're great for stews and slow-cooked one pot meals. This bean was first spied in Puebla, Mexico. The design was so beautiful and detailed, it wasn't clear they were even a bean. Later we found farmers in Hidalgo who were growing a version with just a touch of purple mixed in and we were smitten. A local cook told us that at the end of the growing season, the women plant the beans and harvest them as young greens and saute them in butter. A rarity in Mexico, just like the Moro bean itself. Moro are one of the beans that can be enjoyed on their own, perhaps served with some chopped onion and a little cheese after cooking them simply.